Home > News > Sunrise Roofing: why they trust in SOPREMA to provide the ultimate waterproofing system and solution.

Following a recent roof renovation project at the RNOH, Steve O’Mahoney from Sunrise Roofing, gives a detailed account of overcoming issues on-site and why he trusts in SOPREMA to provide the ultimate waterproofing system and solution. 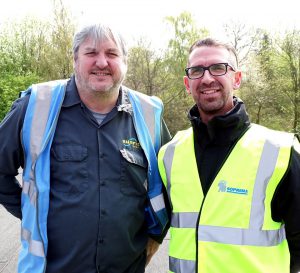 The outpatient centre at the RNOH has a roof which is 1,880 m2. The original waterproofing was a roll & pour system, on a fibreboard recovery board. The fibreboards were bitumen adhered to a metal decking substrate. This was to be a simple rip and refurbishment job, if not for the fact that the hospital needed us to carry out all works whilst the entire block remained occupied, and with normal hospital business being carried out (including surgery).

The geography of the building provided the first logistical challenge, in that access was so congested in normal working hours, that all skip exchanges and deliveries had to be completed before 7:30am each day. We have worked with a number of manufacturers over the years, but we felt the most secure with SOPREMA’s delivery logistics. We were able to negotiate directly with the courier for precise delivery times (2 to 3 a week). Mostly, we were even given the same delivery driver. The same was true of the skips and Network Waste (usually 3 or 4 a week). As a result, the Sunrise Roofing Team was eventually able to create a rhythm of material ingress and waste egress. So far, so good right?

Anyone who has stripped a felt roof knows that it is a physically demanding and a noisy affair. So the plan was always to start work early, and strip as much of the old roof as possible before the surgeries opened at 8:30am, at the same time dealing with deliveries & skips etc.

Prior to starting the project, I had taken around 8 core samples. Like a schoolboy ‘Battleships Champion’, I must have found the only 8 areas, where the recovery board wasn’t stuck solid with thick polymer bitumen. As the Sunrise Team (headed by Marc Evans & Dan Costin) tried to separate the fibreboard from the corrugated metal deck, the remnants of the crumbling and flammable fibreboard was left stuck to the remaining thick laid bitumen. PANIC.

The Sunrise Team had already removed 50m2, so there was no other option, the remaining flammable tufts of fibreboard had to be removed no matter how difficult it was. It was the only way the vapour barrier could be safely adhered, and an overnight seal achieved. For all we knew, there could have been people or millions of pounds worth of equipment below us.

With everyone on their knees, including an ageing and weakening company director, the deck was stripped with wallpaper stripping knives; 1cm2 at a time. We’d tried using shovels and spades but the bitumen was just too thick, and by this time of the day, it had become too soft and rubbery.

By the time we got this first area waterproofed, it was dark. We had completed less than 25% of what we needed to do that day. Every roofer has stories of tough rips, but at the end of that day we were conquered, and we still had another 1,830M2 metres to go….

The next day the whole team was there at 5am, hoping the bitumen would be brittle at that time of the morning. In thirty something years, Marc & Dan’s crew remain one of the hardest working teams I have known, but by the time the doctors and nurses came out to complain that they were making too much noise, and couldn’t they come back later, the entire team had stripped less than 25m2. 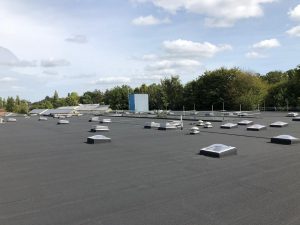 One of the reasons I will normally lead with a SOPREMA system in an open specification tender, is that SOPREMA products are sold in over 100 countries. As a contractor, this means that I am dealing with products that have been developed, and tested to perform in extreme conditions, the heat of the middle east, or the cold of Canada. And that’s of huge importance, but the biggest reason for me, is that as far as I can tell, every crazy and weird situation has already happened. Therefore the answer to any problem we may encounter, has already been solved a dozen different ways.

There was a section where no naked flame could be used at all. SOPREMA’s systems are all designed to work together, so we were able to use SOPREMA’s Alsan Liquid 770TX system in that area without a caveat to the warranty. The same with sealing unmovable and tricky HVAC plant detail. We weren’t the first SOPREMA contractor to come across these issues, so the answers were already waiting for us.

“Excuse me guys, is it possible for you to work in your socks or maybe slippers?,
only we can hear your boots!”

The challenges of refurbishing a roof in an occupied and busy hospital building continued. A metal corrugated roof acts like a massive amplified snare drum when it’s being stripped, or when insulation is being mechanically fixed. In the end, Sunrise Roofing agreed to work nights and weekends for almost two thirds of the roof. Over the last 15 years, Sunrise Roofing has refurbished over 35 roofs of differing sizes for this NHS Trust. We know first hand that the folks at the RNOH are unappreciated super heroes. The last thing we wanted, was to make their already tough jobs any more difficult.

As Director of Sunrise Roofing, I inspect almost every square inch of a roof before I allow it to be inspected by SOPREMA, or any manufacturer. I walked this roof dozens of times throughout the contract. My guys would have had a reasonable excuse if SOPREMA or I had found fault. The SOPREMA’s Sopralene system* is a superb system to work with, but felting in floodlights is extremely difficult. As it is, the roof looks like it was installed using Photoshop.

I’d love to take credit for how well this roof was installed, and how good it looks, but honestly I can’t. For almost a decade Sunrise Roofing has been extremely lucky to have this team, these roofing Marines that improvise, adapt, overcome & really care about their work.

So to Captain Marc Evans & Lieutenant Dan Costin, to all the Sunrise Crew, and to Dave Storrar and Soprema UK, as always, thank you for delivering this project so well.

• The Alsan 770TX System was used when a naked flame couldn’t be used in certain areas on the roof.

• Take a look at our Sopralene brochure for more information. 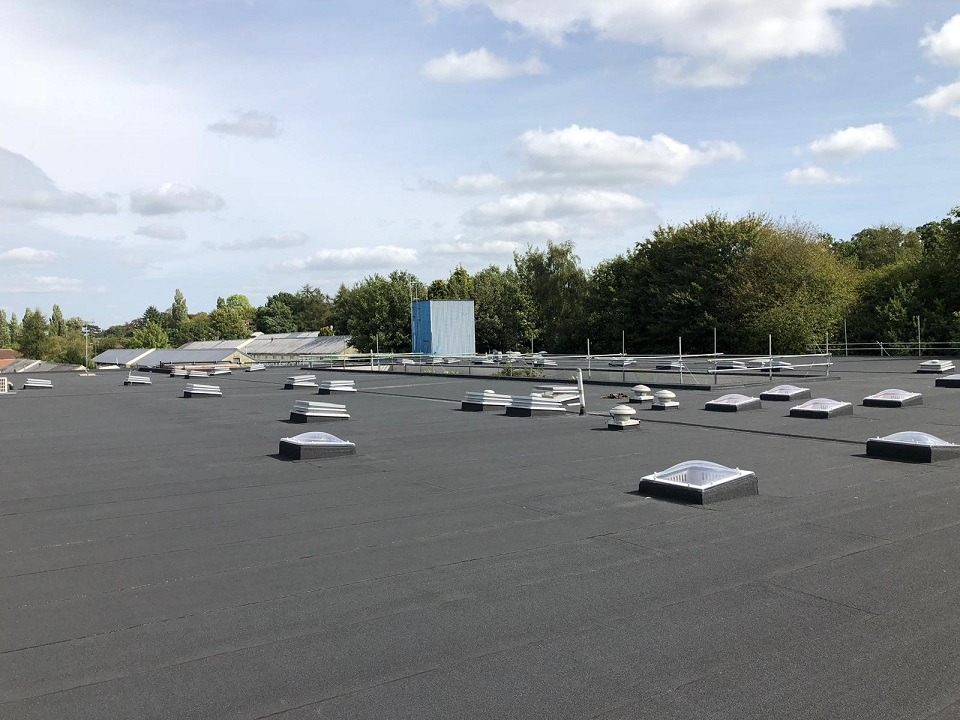