Soprema’s Pavatex natural woodfibre insulation systems helped to bring one of the UK’s oldest aviation sites to new use, preserving the heritage of the former RAF Hendon Airfield for the RAF Museum. The project was part of the RAF Museum’s plan to transform the visitor experience at its north west London site. It involved conversion of the historic hangars and stores into exhibitions and a restaurant, along with landscaping of the outdoor space to create a children’s play area, accessible pathways and visitor parking.

Avoiding Changes to the Building Physics

Nex was responsible for designing the scheme and faced the challenge of refurbishing the semi-derelict ‘Building 52’ stores and supplies building into ‘Claude’s Restaurant’, named after Claude Grahame-White, an early aviation pioneer and the first person to pilot a night flight.

The pre-World War II building is of brick construction. As the architect was unable to ascertain the integrity of the wall, specification of the internal wall insulation required careful consideration to avoid changes to the building physics. It was vital that the chosen system did not reduce the structure’s permeability, which can often lead to trapped moisture and damage to the building.

Rowan Morrice from Nex explained: “While the building that has become Claude’s Restaurant is not listed, it sits with within the context of a listed building on the same site. Our aim for the whole project was to design a scheme that combined the contemporary use of the building with clear conservation goals. We also needed to gain the approval of Historic England and they recommend the use of breathable woodfibre insulation for heritage buildings.”

Rowan Morrice adds: “We explored the option of using a conventional insulation board and vapour barrier but this could still have left the building vulnerable to reverse diffusion, so we worked with Soprema to develop a specification from the company’s Pavatex woodfibre insulation range.” 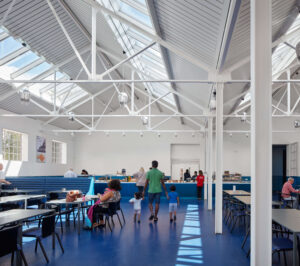 Developed specifically for use in retrofit installations, Isolair is an internal woodfibre insulation from the Pavatex range which is ideally suited to heritage properties. After discussions with Soprema, a specification was developed that included a lime dubbing-out coat, Pavatex woodfibre insulation between studs, and a conventional plasterboard. This wall build-up provides active moisture control thanks to absorption and redistribution of moisture within the woodfibre board and an integrated mineral layer.

Rowan Morrice continued: “The solution provided by Soprema enabled us to avoid the issues and risks associated with vapour barriers by using an effective, breathable insulation. The expert technical advice we received was also really beneficial during the design and specification process.”

“This was the first time we’d used Pavatex products but we have since specified it again on two other refurbishment projects.”

A Soprema spokesperson added: “The Pavatex range combines a traditional renewable material with a technologically advanced approach to deliver effective solutions for building refurbishment. The restaurant at the RAF Museum in London is just one example of the many heritage buildings that have been transformed with contemporary levels of thermal performance thanks to our breathable woodfibre insulation range.”